Doctor Reunites With Patient 14 Years After Saving Her Life 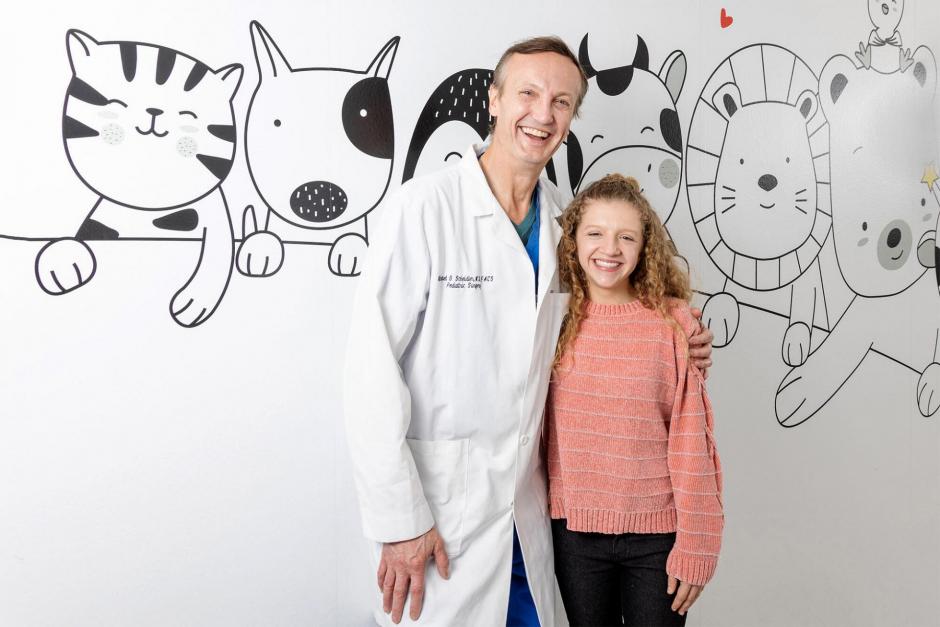 Dr. Michael Scheidler performed life-saving surgery on tiny Annalisa Gubler when she was an infant with a dim prognosis.

For as long as she could remember, 15-year-old Annalisa Gubler had heard about the crucial role Dr. Michael Scheidler had played in her life.

She heard about how excited her parents had been to welcome their firstborn child into their family, how ill she soon became as an infant, and how Scheidler, a Las Vegas pediatric surgeon who now is with the Kirk Kerkorian School of Medicine at UNLV, saved her life.

It was the kind of story that filled the curly-haired girl with wonder, made her want to one day thank and meet the physician that her parents said lovingly called her “my little twisted sister.”

Her parents, Dr. Michael and Rachel Gubler, had told her how much they enjoyed the miracle of childbirth, when all seems right in the world and only love fills your soul.

And the Gublers, who moved from Las Vegas to Arkansas after Scheidler performed his life-saving surgery, also told her it wasn’t too long after her birth that they began to worry that their precious daughter wouldn’t live much longer.

No matter what she ate, she kept little of it down. Month after month, doctor after doctor in Las Vegas said she apparently suffered from acid reflux, the stomach flu, or an allergy. Trip after trip was made to emergency rooms, where she received IV therapy for dehydration.

She was so sickly and weak that she was missing milestones for crawling and walking. When she was taken for a ride in the stroller, her mother carried a bucket to catch her retching.

Finally, when she was 18 months old (Annalisa weighed half of what she should), a doctor ordered imaging, a road map of the intestines, that was shown to Scheidler. It turned out her intestines were not fixated and aligned as they should be, a condition called malrotation. In fact, her bowels were twisted and rotated upon themselves and could have proved fatal without Scheidler’s surgical acumen.

It was that brief sketch her parents gave her of her early life that Annalisa recalled when leaders at her church said the 2021 Christmas season was the perfect time to thank someone who changed her life. She searched the Internet until she found an email for Scheidler and sent him a note on December 7:

Hi Dr. Scheidler! This is Annalisa Gubler. When I was little you…fixed my intestinal malrotation. You called me the twisted sister…I wanted to say thank you for helping me be alive and healthy now. My parents say that you were an answer to their prayer. I am in high school in Bentonville, Arkansas, and run cross country and play the violin in orchestra…I want to express my love and gratitude for you, and for your dedication to help people like me. THANK YOU!
Love, Annalisa Gubler

The email, which Scheidler shared with colleagues, quickly drew a response from him:
Annalisa,
It’s really nice to hear from you and I’m glad you are doing so well. I certainly remember you. Some patients like yourself leave a lasting impression and I give them little nicknames. It’s my way of being invested and there has never been another twisted sister. You know the world is a funny place. I trained at Arkansas Children’s Hospital before coming to Las Vegas so I know where you live. Some of the docs probably still remember me there although it’s been a long time. Please keep in touch. You are the reason I do what I do.

Though Annalisa’s parents didn’t know she had written Scheidler, they were ecstatic to learn that she had. It just so happened that the Gubler family would be in Las Vegas in February for a cousin’s wedding and arrangements were made with Sheidler’s staff for Annalisa and her parents to meet the surgeon at his Kirk Kerkorian School of Medicine office.

When Rachel Gubler came on the phone, she said the upcoming meeting with the doctor was bringing back “all sorts of memories. I remember how confident and humble Dr. Scheidler was at the same time, how he put me at ease. I remember how he said he needed to get Annalisa into surgery as soon as possible…my husband and I are people of faith and we prayed over it, prayed for Dr. Scheidler. I felt at peace. He was an answer to a prayer. I really trusted him. I knew God had sent him to us to make Annalisa live.”

In the days before he saw the Gubler family, Scheidler went over Annalisa’s chart from 14 years ago. “I met her in 2008 when she was 18-months-old. She weighed in the 10th percentile for her age…unable to keep any food down…A very serious sequel of malrotation is…the intestines can die…Annalisa was taken urgently to the operating room where a Ladd’s procedure was performed. During a Ladd’s procedure, the intestines are fixed in a way to decrease the chance of any more twisting. We can’t put the intestines in a completely normal position but we can make it such that they won’t cause any troubles. Annalisa did amazingly after surgery. She quickly tolerated food and gained weight. I saw her a few times after surgery and she had changed so much. No longer was she a fussy child throwing up. She was thriving.”

On Feb. 19 of this year the Gublers waited for Scheider at his office. When he came through the door, it wasn’t long before Annalisa’s parents were thanking him, as they did 14 years earlier, for saving the life of their daughter. Scheidler was thanking them for coming to see him.

And Annalisa, the twisted sister, hugged Scheidler — and then hugged him some more.