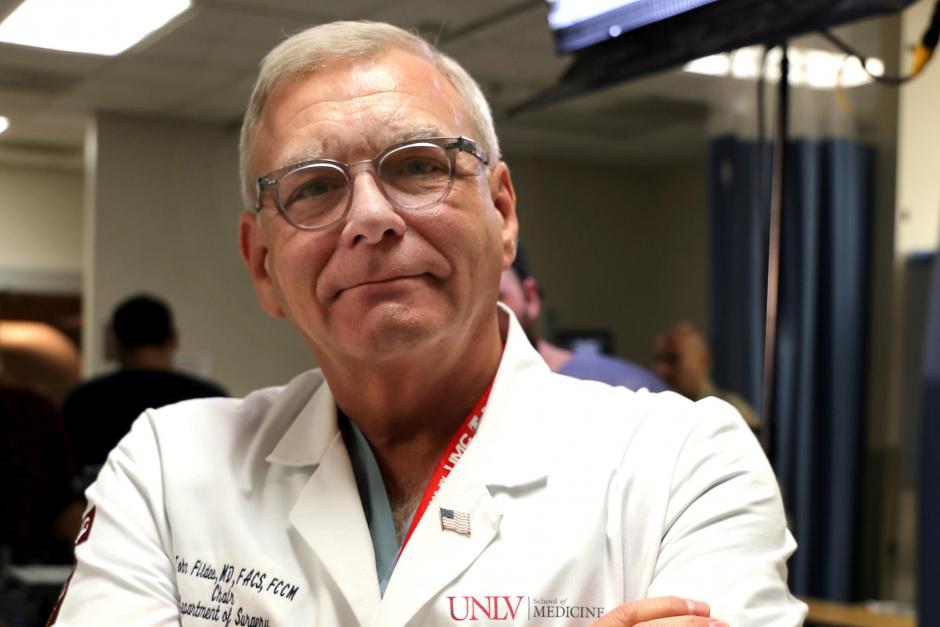 While Dr. John Fildes’ interest in medicine began as a youngster, it was what he saw working in a hospital during college that spurred his interest in trauma care.

Working in a variety of hospital jobs in New York state, Fildes said he saw many people die following car wrecks and industrial accidents — people he thought could have been saved if the hospital had had better acute care capabilities.

Today Fildes serves as the inaugural chair of the UNLV School of Medicine surgery department and is know worldwide for his work in trauma medicine.

He first became interested in medicine as a child. “I decided very early on after a few injuries and illnesses that I wanted to be trained in medicine — that I had to learn a body of knowledge that was large and complex,” said Fildes, who grew up in New York. “A lot of kids wanted to be astronauts with NASA back then. I wanted to work in human service, to directly help people.”

He majored in biomedical engineering, graduating with honors from Union College in Schenectady, New York. While there he worked at a local hospital as an orderly, pathology aide, and EKG technician.

That’s when he saw the need for improved surgical critical care — trauma medicine.

Later he graduated from medical school at the University of Santo Tomas in the Philippines. He then completed a residency and fellowship in general surgery at Bronx-Lebanon Hospital in New York and a fellowship in surgical critical care, burns, and trauma at Chicago’s Cook County Hospital. Both hospitals dealt with a huge volume of patients who are crime victims, often arriving in critical condition from shootings or stabbings.

“It was unbelievable what we saw there,” said Fildes, who has been a Fellow of the American College of Surgeons since 1990. “I found that I was good under pressure, that I was making a difference in people’s lives.”

In the ’90s he became president of the Chicago Metropolitan Trauma Society and earned leadership positions with the Metropolitan Chicago Chapter of the American College of Surgeons. His research on shock and treatment of hypothermia included publications in the highly respected Journal of Trauma and the American Journal of Surgery.

In 1996 after working at the Las Vegas campus of the UNR Medical School, he became director of the UMC Trauma Center. UMC provides Nevada’s only level-1 trauma center, only pediatric trauma center and only burn center. Under his guidance, UMC, which is the main training hospital for the UNLV School of Medicine, has become one of the national leaders in trauma care. Of those who arrive alive at the trauma center, a full 96 percent survive.

According to the federal Centers for Disease Control and Prevention, if you are severely injured, getting care at a level-I trauma center can lower your risk of death by 25 percent.

“I look for surgeons who exhibit grace under pressure, who are able to operate under uncertain conditions,” said Fildes, who has served as a consultant to American surgeons working on soldiers wounded in Afghanistan. “They need to go from zero to 100 miles an hour in five minutes.”

Given his success in Chicago and Nevada, the American College of Surgeons placed him on its evolving National Trauma Data Bank Committee.

In the wake of the Sept. 11 attacks, Fildes’ work with the trauma data bank became nationally recognized. After he and others were called to testify before the U.S. Senate, he was instrumental in gathering information on the nation’s trauma centers, finding out just what they were capable of and what they were actually doing.

“It informs policymakers in real time (about) what’s occurring in the United States,” said Fildes, who became national chair of the American College of Surgeons Committee on Trauma in 2006. “Without information, you can’t plan. We need to build systems of care based on data — even the wearing of motorcycle helmets is based on data sets.” 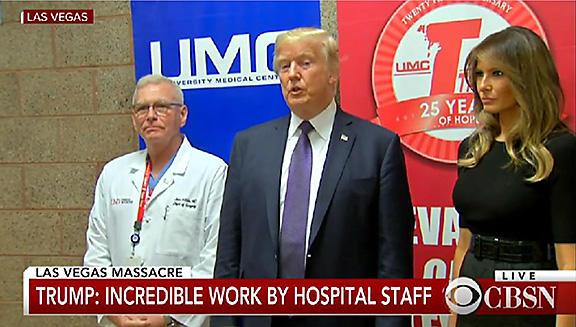 Following the Oct. 1, 2017, mass shooting on the Strip, he often was sought out by reporters. On camera, he sometimes reminds older viewers of Sgt. Friday on the classic television show Dragnet, sharing “just the facts.”

As Fildes looks to the future, he sees much more to do in Southern Nevada.

“I would like to grow UNLV surgery,” he said. “I want to see liver and heart transplant centers, comprehensive surgical oncology treatment for cancer, expanded pediatric surgery, the kind of things people now have to leave Las Vegas for.”