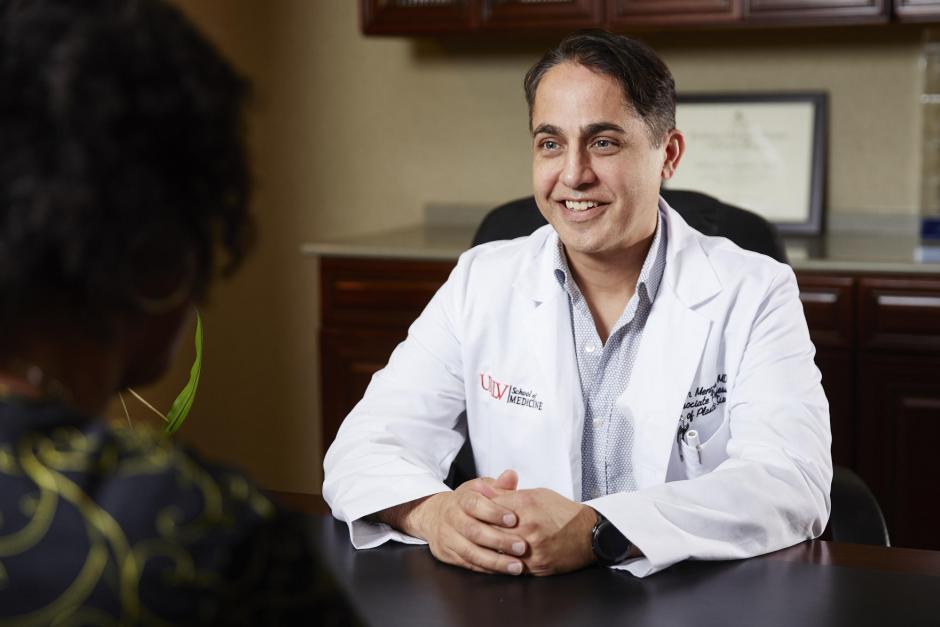 For children with rare conditions, UNLV Medicine surgeon restores the ability to show happiness. It’s a procedure that leaves both the patient and the surgeon with smiles on their faces. Surgery to correct the effects of Moebius syndrome – a rare congenital condition that can paralyze a person’s entire face and affect muscles that control back and forth eye movement – can make it impossible for a person to show that sign of happiness that most people take for granted.

Such was the case for 8-year-old Abraham Chavez, know as AB, before Dr. John Menezes, associate professor of plastic surgery at the UNLV School of Medicine, stepped in.

When AB’s situation was written about in the Las Vegas Review-Journal in 2017, he was a child who just wanted to be like everyone else.

“I just want to be able to smile like other kids,” he said prior to his surgery at University Medical Center. AB didn’t have all the possible problems related to Moebius syndrome. His eye fuction was normal, but he could not smile.

A Valuable Contribution – As for the doctor, he said he always has wanted to be able to make a difference in people’s lives.

“To be able to change a child’s life, change an entire family’s life for the better, is rewarding,” said Menezes, the only fellowship-trained (Johns Hopkins University School of Medicine) craniofacial surgeon in Las Vegas.

What Menezes did in a nine-hour procedure was transplant the expendable, thin gracilis muscle and its associated nerve from AB’s thigh to his cheek. It is painstaking surgery. The nerves and blood vessels involved are no more than 2 millimeters in size. Stitches are finer than a human hair. Dissection of tissues and connection of the artery, vein, and nerve takes six to eight hours.

First, Menezes created a facelift-type incision in front of AB’s ear and extended it below the angle of his jaw. Then, much like a facelift, the skin and fat were lifted from the cheek, creating a pocket to accept the muscle transplant. According to Menezes, biting down is initially required to produce a smile, but later a child can adapt and learn to smile in an almost spontaneous manner.

“We need to continue to turn lives around,” said Menezes, who regularly deals with cleft lip and palate repair, ear reconstruction, microsurgery, adult and pediatric facial trauma, and the correction of skull birth defects.

Substantial Need – “Teaching medical students and residents in this field is most important. Keep in mind cleft palate happens in one in a thousand births. So if there are 40,000 new babies born a year in Nevada, there are 40 infants who need cleft surgery each year. That’s just for the primary reconstruction, and then there are secondary surgeries in early childhood and final reconstructions in the teenage years.”

Menezes, who also does elective plastic surgery, is about to once again embark on a pediatric plastic surgery path that took him to the Philippines to repair cleft palates.

“I want to take medical students with me. I stopped (going) for a few years while I was growing my own family,” said the father of two, “but now it’s about time to start that work again.”