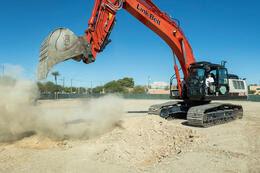 With Donor funding through the Nevada Health & Bioscience Corp., the 135,000 square foot building is expected to open in summer 2022.

No one will ever accuse Nevada Health & Bioscience Corp. (NHBC) of taking its time to make a difference in the community.

Not even a year has passed since Nevadans first heard of the new nonprofit — its mission is to develop healthcare education, research, clinical assets, and programming in Nevada.

Just a week ago, on Oct. 29, 2020, the NHBC broke ground on the UNLV School of Medicine’s first permanent building. The 135,000-square-foot, five-story Medical Education Building will be the centerpiece of the Las Vegas Medical District.

The medical school’s temporary facilities on Shadow Lane opened in 2017 with its first class of 60 students. In the coming years, the number of students per class can double, even triple.

“We are extremely privileged and pleased to be able to … celebrate this positive landmark for the further expansion of the UNLV School of Medicine, the expansion of medical education in Southern Nevada, and for the advancement of healthcare in our community and in Nevada itself,” Maureen Schafer, CEO of NHBC, told the restricted number of guests and media on hand for the ceremonial groundbreaking.

The world healthcare crisis — the current global pandemic of COVID-19 is now responsible for more than 220,000 deaths in the U.S. and more than 1.1 million worldwide — meant social distancing guidelines were in place for the tented ceremony that took place in mid 70-degree weather under sunny skies. To help accommodate supporters of the medical school that the virus kept away from the ceremony, the event was live-streamed and is still available to watch.

UNLV School of Medicine Dean Dr. Marc J. Kahn told the Las Vegas Sun, one of the several media outlets covering the groundbreaking, that in addition to turning out more healthcare professionals, the new medical school can help diversify the area economy by drawing biotechnology and pharmaceutical businesses to the area. Kahn noted how COVID-19 has once again shown that the area economy is too reliant on gaming and entertainment.

Business experts have said the new medical building and its offshoots will do for research and healthcare what Allegiant Stadium will do for the entertainment industry in Las Vegas. A major study helping justify the medical school’s building found that the medical school would bring in about $1.2 billion a year to the economy after 15 years of startup. By 2030, studies have shown that the Las Vegas Medical District, which now stretches across 684 acres, should generate more than 16,000 jobs.

It is because of philanthropic funding commitments totaling more than $150 million that full bore construction of the medical building begins soon. The funding, announced last November at a press conference held by Gov. Steve Sisolak, largely comes from the Engelstad Foundation and the Lincy Foundation, with additional gifts from unnamed donors. Before the announcement, the donors had formed a donor development limited liability corporation called the Nevada Health and Biomedicine Asset Corp. to manage how the funds are spent.

During her remarks at the groundbreaking, Schafer saluted the NHBC board of directors for their commitment to the new medical school: Andy Artusa, MaryKaye Cashman, Marianne Boyd Johnson, Kris McGarry Engelstgad, Nick Santoro, and Lindy Schumacher.

“Without them, this project would not have been possible,” Schafer said.

To be located at 625 Shadow Lane, the new building is designed by TSK Architects to support a class size of 120 students — double the school’s current size. The flexible structure of the building will allow it to easily adapt to a class size of 180 students, which is expected as the school grows. It is slated for completion in summer 2022.

“That is really about three months ahead of schedule,” Kahn told the media at the groundbreaking.

The new facility will include clinical skills training labs, simulation suites, anatomy and physiology labs, administrative offices, a forum, a cafe, a student lounge, and a learning resource center. Classrooms of various sizes will provide opportunities for problem-based learning.

The county land where the first permanent building will be located — nine acres across from Valley Hospital Medical Center — will also be able to hold other health science-related facilities.

Noting that the building will help serve the community, Sottile said: “It’s important to not forget the challenges people face in accessing health care.”

There were many people who didn’t think a new medical school would get built, Weekly said. But now, he grinned, it will be “our jewel right here in the desert.”

When his own son was critically ill in the pediatric intensive care unit at UMC, Knudsen told attendees he had many discussions with medical students there. Too often, he said he heard that they had to leave town for graduate medical education. He said there’s an obligation to build a community where students want to stay and build their practices and raise their families.

At the groundbreaking, an elated Kahn asked the audience to now imagine Las Vegas as a place people choose to come for the best healthcare, as a place that serves as a model for the rest of the nation — in fact, imagine Las Vegas as the home of an academic health center where the most promising medical technologies are homegrown at UNLV.