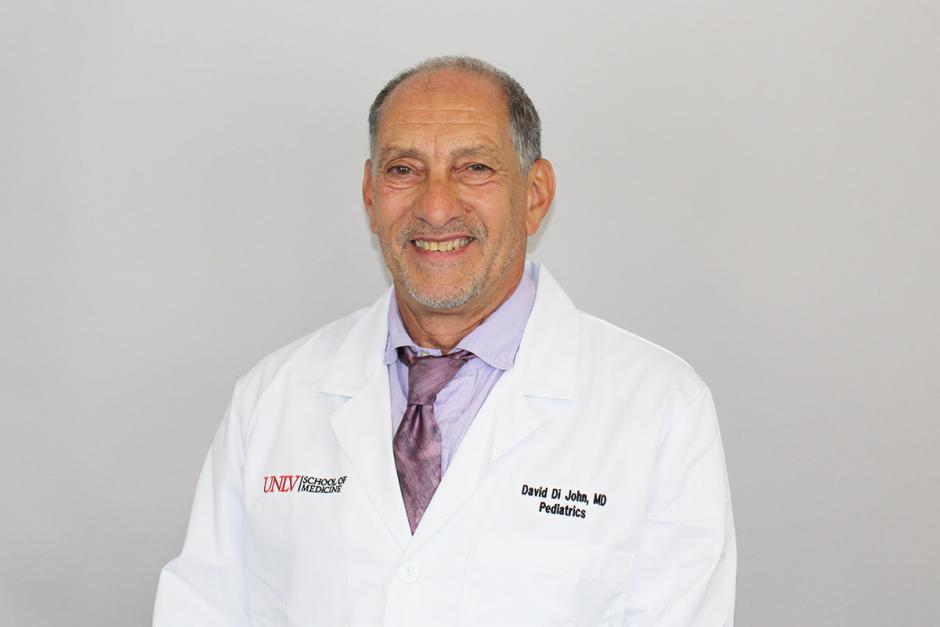 Dr. David Di John, professor and section chief for pediatric infectious diseases at the Kirk Kerkorian School of Medicine, is the director of the UNLV Health Maternal Child Wellness Program

In the 1980s and 90s, when David Di John, MD, worked at and later headed an AIDS clinic in New York City, an outbreak of HIV and AIDs swept across the United States and the rest of the world. He remembers it, in part, as a time when there were numerous instances of mother-to-child transmission of HIV, which led to children dying young.

Children who once were talking and walking would become wheelchair bound and then completely bedridden, unable to even communicate for months before they died, recalled Dr. Di John, now the section chief for pediatric infectious diseases in the Kirk Kerkorian School of Medicine at UNLV, as well as professor and vice-chair in the department of pediatrics. “There wasn’t much to offer those patients back then…You couldn’t really treat them…It was heartbreaking.”

Today, the infectious disease specialist also serves as medical director of the UNLV Health Maternal Child Wellness Program (MCWP), which provides care to women, infants, children, and youth who are infected with or affected by HIV. Because of what he calls an “explosion of new drugs,” HIV no longer has to lead to AIDS, the late stage of HIV infection that can be a death sentence. While not curable, HIV can now be a manageable chronic condition.

While acknowledging medicine has come a long way in treating HIV, Dr. Di John also points out, however, that the need for the MCWP, which replaced an earlier university/community program, remains.

“Data from the Centers for Disease Control and Prevention (CDC) and the Southern Nevada Health District (SNHD) reveal there are more than 10,000 persons living with HIV in Clark County,” he said. “Among these are over 1500 women of childbearing age who have HIV. Consequently, there will continue to be a need to evaluate and care for the HIV-exposed infants born to these women. In addition, young people in the 13-24 age group have among the highest rates of new HIV infections. This is further complicated by the fact that up to an estimated 20 percent of infected people are unaware of the diagnosis, and among people in the 13-24 age group, over 40 percent are undiagnosed…Our program is an important part of the local effort to advance the national agenda and goals of the End the HIV Epidemic effort.”

That evidence-based argument, coupled with the quality of the program, Dr. Di John said, is responsible for the Health Resources and Services Administration of the Department of Health and Human Resources awarding MCWP, which has a staff of four, a four-year renewal grant of more than $190,000 a year, roughly the same amount as the previous grant awarded to the program, which officially began in November 2017.

Program patients come from Clark and Nye Counties in Southern Nevada and Mohave County in Arizona. They have a variety of socioeconomic backgrounds. Most were born in the United States, but several patients were born in Central and South America, in Africa, and in Europe and Asia. Many have Medicaid as their insurance, but some have private carriers.

“Among the many new patients we have enrolled in our program over the past five years, most have been teenagers and young adults who acquired HIV via sexual transmission,” Dr. Di John said.

The program has had tremendous success in maintaining the health of HIV-positive youth. None have died from the virus.

“All of them are on antiretroviral therapies (ART) which they are taking and tolerating, and over 90 percent have suppressed viral loads (which means standard tests no longer can detect HIV in the blood and the virus is not likely to be transmitted sexually or otherwise),” Dr. Di John said. “None have had serious opportunistic infections, which used to be a significant cause of morbidity and mortality among these patients.”

Collaboration with other health entities in Greater Las Vegas is the key to the effectiveness of the program.

“This is not something you can do by yourself,” Dr. Di John said. The program holds monthly meetings with the Southern Nevada Health District (SNHD), the UMC Wellness Center (which cares for HIV-infected adults), and community agencies that work in various capacities with patients with HIV/AIDS. “In these meetings, we are alerted to new patients who may be in need of our services,” the doctor said. “Hospitals where pregnant HIV-infected women are delivering notify us as to an impending or recent birth, and we assist them directly or by telephone consultation with the management of the mothers and their infants. These hospitals also notify us if they have identified a newly infected young patient with HIV infection and refer them to us. Local pediatricians and other healthcare workers also refer such patients to our clinic.”

Around 80 different patients are seen annually, with multiple patient visits commonplace for monitoring of their conditions. Patients, some inherited from the previous program, include about 20-25 HIV-positive children and youth, 10-20 HIV-infected pregnant women, 20-35 HIV-exposed infants, and pediatric patients who’ve had exposure to HIV through life experiences that include everything from needle sticks to rape. Patients are seen until they age out of the program at age 24 or decide to seek care with other medical professionals.

Though Dr. Di John says obstetricians now put pregnant women with HIV on ART, which greatly lessens the chance of a baby being born with HIV, he says some women come to the clinic still concerned about the risk of transmitting the virus to the baby. “Some are newly diagnosed, or have not been fully adherent to their HIV or prenatal care, and have higher viral loads and are at higher risk…However, in most instances, we are able to counsel them that by taking their ART and maintaining their HIV care and obstetrics appointments, they can achieve viral suppression and minimize the risk to the baby.”

Babies born to HIV-positive mothers receive ART treatment for a four to six-week period after birth. Known as PEP (or post-exposure prophylaxis), it significantly decreases the chance of a baby getting HIV.

“Most HIV-exposed infants within our area are seen by me in the hospital immediately after birth,” Dr. Di John said. “For those I cannot see in the hospital, I confer with the neonatal staff about proper management and arrange follow-up in our clinic. For all the exposed infants, we arrange for testing and follow-up at our program at about two to three weeks of age. We follow these infants with serial HIV testing for up to two years, until we unequivocally determine whether or not they are infected. When we have determined that they are HIV-exposed but not infected, we discharge them from our clinic to be followed by their pediatricians.”

Dr. Di John is understandably proud of the fact that of the over 100 babies cared for by the program in the last five years – children born to infected mothers – only one was born HIV-positive. “That infant was born to a mother who was diagnosed with HIV very late in pregnancy, and despite aggressive measures to treat the mother with significant lowering of her viral load, it was still detectable at the time of delivery, and the baby was quickly diagnosed as HIV-positive. With treatment of that baby, the child has had undetectable viral loads throughout its life and remains otherwise healthy.”

Forty years ago, Di John admits he couldn’t foresee what’s happening today in his program – medications so powerful that even young people who’ve been told they are HIV positive can be excited about tomorrow.

“Almost all of them have been hopeful about their futures,” he said. “They have plans to go to college, hold jobs, and have children and families of their own. Some of our adolescent patients have even expressed an interest in becoming doctors.”